Founded in 2007 with the goal of restoring chant and polyphony in northeast Florida, this dynamic women’s ensemble is the resident schola for the Shrine of La Leche in St. Augustine, Florida, where they sing a monthly Choral Vespers. Its members range from professional musicians to teachers, translators, and a retired police officer. 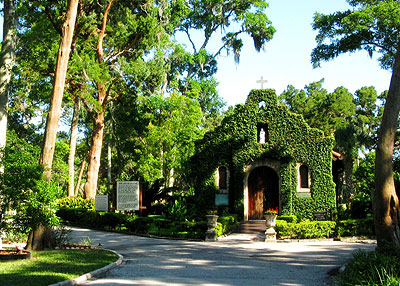 In addition to the Choral Vespers, Cantorae has performed at the Cathedral Basilica, the annual celebration of St. Augustine’s founding in 1565, and festivals and concerts.

Under Mary Jane Ballou’s direction, Cantorae St. Augustine offers a diverse range of sacred music from 10th century Gregorian chant to 21st century settings of ancient texts. A special interest is the music of the Eastern Churches and the shape-note tradition of the American South.

Cantorae is also available for weddings, funerals, and special celebrations throughout Northeast Florida.

Enjoy some selections from Cantorae’s November 2012 concert at the Cathedral-Basilica of St. Augustine.  This concert on All Souls’ Day featured a mix of chant, polyphony, and Southern shape-note pieces – and it was all about evenings and endings.

“Salva nos” is the antiphon for the canticle of Simeon that is part of Compline – the last office of the day.

Kaplan’s “Enosh” is a sorrowful round in Hebrew, using a verse from Psalm 130 to meditate on the brevity of life.

Last of these samples, “Sweet Prospect” lets us know what to expect when we’ve “crossed over Jordan.” (Remember, live recordings always feature coughing and shuffling.)