The following is taken from “The Wisdom of Group Deicision by Craig Freshly via the Co-Housing Newsletter (and no I don’t live in a co-housing community, I’ve just gotten the newsletter since forever). What do to when someone else in the meeting is talking:

“Bite your tongue. Cool your jets. To listen, do not talk. Do not be distracted by planning your talk. If I let you talk first while I listen, it gives me some practical advantages. First, to hear where you are coming from helps me choose my words. You have likely provided me some new information that I can incorporate. Second, once you have your words out you are more likely to be open to hearing mine.”

I think this applies in any group situation – business, church, community or arts organization.  Just listen. And I think the group can be as small as two.  This quote came by chance as I’m getting ready for a group meeting.  I think I’ll stick a copy in my notebook – after I tape my mouth shut!

One of the most dreaded interview questions has to be “Where do you see yourself five years from now?”  I always wanted to crawl under the chair when they asked that.  What’s the right answer?  “Anywhere but here?”  Probably too snarky.  “A leading contributor to my field and a valued asset to this organization?”  Sounds like a textbook answer.  And so on.

At the same time, it’s probably a question worth asking yourself – especially if that first response is the one that springs to mind.

If you’re a musician in a church job, are you where you want to be in five years?  If you want to stay, how do you want your music and your choir to sound?  If you want to move, where would you go?  Or would you rather do something else?  Or add another string to your musical bow – arranging, composing, solo performing?

I’m not saying what anyone should do.  I’m just suggesting the question. 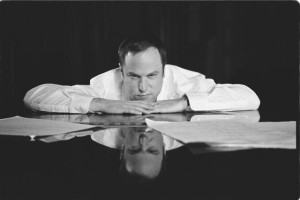 Previewing a remarkable composition for organ and trumpet by Boston-based composer Richard J. Clark.  Seven movements based on the Gregorian chant propers for the requiem mass, performed by the composer on the organ and Richard A. Kelley, trumpet.  Learn more about the composer at http://www.rjcceciliamusic.com/

I’m not a big fan of modern organ compositions, many of which sound like something is dreadfully wrong with the instrument or that the performer is having a medical emergency.  This is different – just the right combination of tonality and dissonance.  The mix of organ and trumpet is well balanced.  In short, Clark nails it.

Thoughtful, enjoyable, and most excellently performed.  Definitely going into the rotation for The Classical Fan Club (every Thursday from 11 a.m. to 1 p.m. on WFCF Flagler College Radio, an iHeart radio station). 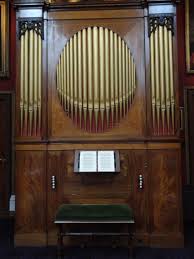 There are absolutely no pieces that are more entertaining to play than 18th century English organ voluntaries.  And I treated myself to two volumes of these.  Great slow full diapason introductions, followed by fugues or trumpet tunes with winsome echos.  Most of them are  by lesser composers who were leading organists in their day.  Boatloads of fun for the fingers.  And many are quite useful for entrances and for that time with the wedding guests straggle out of the church.

You just can’t go wrong with any of the dances from Terpsichore – at least I think so!  Enjoy this clever YouTube and dance through the day!

This morning I saw a resplendent peacock on the wall at the Fountain of Youth, home to a sizable number of peacocks and peahens.  This peacock was obviously looking for “companionship,” but there was just one problem.  He was facing the street.  And the chances of an interested peahen driving by were about nil. The peahens were behind him.  (And probably too busy looking for bugs to notice.)  He needed to turn around.

How often is that the case with us?  There we are – with all our beautiful music, art, poetry, projects, whatever.  And no one seems interested.  So we sing louder, use brighter colors, etc. in hopes of a response.  Still nothing.  Maybe we need to turn around.  Maybe 180 degrees, maybe only 90 degrees.  Perhaps our audience is behind our backs or over to the side, but we’ve been so focused on the audience we decided should want our work that we never thought someone else, not necessarily of our choosing, might be wanting and waiting for it.

So I think I’ll look outside the box, under the fence, over my shoulder – you get the drift.  Just thinking.

And I hope that poor bird reads this posting!

In response to Pope Francis’ statement on wanting a church which is poor and for the poor.  You can read all of it here.

“I trust that as we get to know Francis better he will make this clearer. That he has a preferential option for the poor is already clear and admirable and inspiring, but I thought we already are for the poor and always have been, although — of course — there is always more to do. But by “a Church which is poor” does he means humble? Poor in spirit? Is he talking about dispensing with what is beautiful in the church, because it is somehow insulting for the poor? I have a hard time believing this because we have heard that Pope Francis’ favorite author is Dostoyevsky and he therefore must have some appreciation of “the world will be saved by beauty” and the transcendent beauty — both material and interior — that the church offers the world. Shared and instructive, it is all meant to better access the different routes to knowing God.

Moreover, we should not be ashamed of the beauty of the Bride of Christ and his Mystical Body. I have a cousin who is a Capuchin, like Cardinal O’Malley, and he has worked with very poor people living in destitute and often violent areas. He’s told me more than once that the poor feel condescended to when they are served the Holy Eucharist from ceramic chalices and straw baskets. “The want the beautiful things,” he says, “because God should have beautiful things and they should be able to share in that.” Beauty is evangelical.”

Like many, I have been astonished at the vitriolic diatribes that poured forth after the Pope’s election.  I wonder how many people who might have been interested in the Extraordinary Form of the Mass have had that interest extinguished.  How many pastors and priests have thought, “Gee, I sure hope I don’t run into those folks.”  And how many with an interest and knowledge of more traditional liturgical music, art, and architecture will find themselves dismissed out of hand as “probably pretty unpleasant crazies.”

Thanks so much, guys!  I miss Pope Benedict XVI too, but acting like hysterical children won’t bring him back.  Or advance the cause of true liturgical restoration.

May God grant the Holy Father all the blessings and strength he will need to rebuild the Church!

Occasionally, you read something that stays with you, that continues to influence your thinking, that crystallizes an issue or fact.  The so-called “seminal essay.”

For me, “Gothic Pillars and Blue Notes: Art as a Reflection of the Conflict of Religions” by Quentin Faulkner has been one of these.  Originally published in The American Organist in 1998, this three-part essay is available at the digital archive of the University of Nebraska – Lincoln.  Go find it and read it.

One quote: “Whatever a society’s actual religion is – whatever mixture of adherence to revealed and codified religious doctrine and practice, or to human personalities and ideologies, or to superstition, or to human selfishness – that religion will be faithfully embodied in its culture and its art.  To the degree and at the rate the religion changes, so will its accompanying culture and art.”

In 2000, I was lucky enough to hear Faulkner on this topic at a conference at St. Johns University.  I’ll never forget the two opening slides. The first was a sloppy liturgy in an ugly modern church.  The second showed the highly-choreographed opening of a major college football game.  There was no mistaking what really mattered in contemporary American culture.  Obviously, this was an attention-getting ploy.  Well, you’ll just have to take my word that it only got better from there.

At the time, I was just considering “re-involving” myself in sacred music.  Now, it seems that hardly a day goes by without some aspect of Faulkner’s essay coming to mind.  Check it out!

Last Sunday found me at the Cathedral of St. John the Baptist in Charleston, South Carolina for the 11:15 am Mass.  Admittedly, I know Scott Turkington, the choirmaster and principal organist – and yes, I already knew he’s fantastic.  However, I hadn’t been there for a “principal Mass” for some time and wondered how things were going.

Well, let’s just say that the choir and the organ “rocked”!  The music covered several centuries and did it gracefully.   I’m giving you the “playlist” because it represents such a felicitous marriage of styles.  Everything hung together and that’s an exercise of liturgical judgment that demonstrates the wonderful dimension that music brings to the Mass.

There were Gregorian propers for the Introit, Offertory, and Communion.  The motet at the Offertory was “How Lovely is Thy Dwelling Place” from Brahms’ German Requiem.

The Ordinary of the Mass was the Missa de angelis, with the exception of the Agnus Dei from the Mass of Blessed John Henry Newman by James MacMillan.  The Responsorial Psalm was a setting by Richard Rice and the Alleluia by Theodore Marier.  The level of congregational participation was above average from where I sat. Marier was also the composer for an English setting of Ubi caritas at Communion.  That was followed by a lively motet by Palestrina, Exsultate Deo.

Since I’m not an organist (and it wasn’t in the worship pamphlet), I can’t tell you the prelude and postlude.  The only “disconnect” was the celebrant who didn’t sing, chant, or intone a single syllable – and yes, he could have completed the “liturgical loop,” so to speak – but I was still thrilled to hear a great schola and choir, ripping hymn accompaniments, and super motets.

If I were an unbeliever who had wandered in the door, I’d want to know more about a religion with this much beauty. Now that’s Cathedral Music!